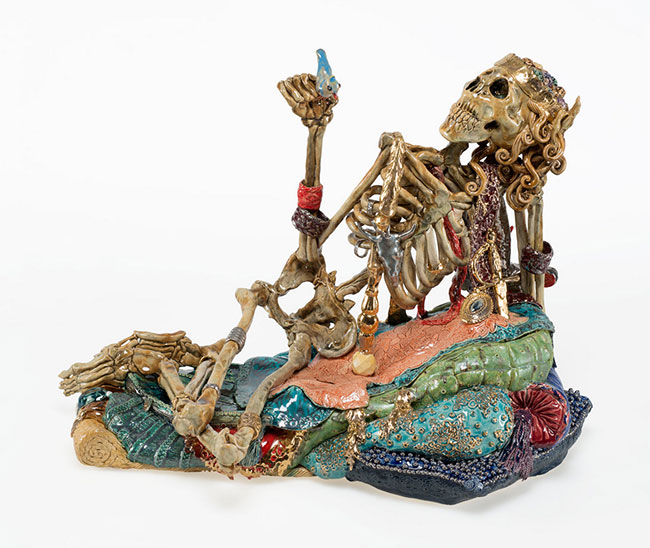 AMSTERDAM — At first glance, Jessica Harrison’s “Shirley” looks like one of those Victorian-style porcelain collectable figurines so popular in the 1980s — the kind that Ms. Harrison’s mother and grandmother used to display in glass vitrines in the sitting room.
But on closer inspection, Shirley’s head is not where it should be; it is severed from her neck, and seated on the palm of her hand.
This artwork is part of a series by Ms. Harrison, a British contemporary artist who buys cheapish porcelain figurines on eBay and turns their little lives into scenes of self-inflicted horror, often involving their own disembowelment.
Ms. Harrison’s work represents the radical edge of contemporary ceramics art — one end of the range that a new exhibition at the Bonnefanten Museum in Maastricht, the Netherlands, hopes to convey.

From The New York Times

The show, “Ceramix,” which runs until Jan. 31, spans 100 years and 270 works of ceramic art. It includes early pieces by Auguste Rodin, Henri Matisse and Fernand Léger to contemporary work by Edmund de Waal, Thomas Schütte and Ai Weiwei. Items have been borrowed from all over the world, including the Victoria & Albert Museum in London; the Museo Internazionale della Ceramica in Faenza, Italy; the Petit Palais in Paris; and the private collection of Luciano Benetton.
The exhibition will travel next spring to Paris, where it will be split between two venues: La Maison Rouge, a contemporary art foundation, and the Sèvres Ceramics Museum, just outside the capital.
“What unifies all the work in the show is that it’s all art, and not functional materials,” said Stijn Huijts, artistic director of the Bonnefanten Museum.
The show challenges notions that ceramics are traditional, mannered and overly precious. Instead, Mr. Huijts hopes that people will come away from the show grasping the “huge freedom that the material offers to the artists.

”The show came about by coincidence. At a dinner party in Los Angeles a few years ago, Mr. Huijts, who had recently become the new director of the Bonnefanten, mentioned his new job to Camille Morineau, a French curator he had worked with in the past, and handed over his new business card.
Ms. Morineau remarked on the street address on the card: Avenue Céramique in Maastricht. Mr. Huijts explained that the street was at the heart of the former ceramics production district, dating from the early 19th century. Several manufacturing plants that produced earthenware household goods like bowls, cups and plates were in the area, and the museum was on the spot of the former Société Céramique, a pottery factory.
Ms. Morineau told Mr. Huijts that she was developing an exhibition of ceramics-based artworks for La Maison Rouge. Mr. Huijts had a personal interest in the subject: As an art student, his first area of study had been ceramics.
Though ceramics — essentially anything created using white, brown or black clay, sculpted and then heated in a kiln — are often regarded as more of an applied art than a fine art, a variety of artists have employed the medium. Rodin, Paul Gauguin and the Fauvists explored the material at the turn of the 19th century; the 1940s saw the emergence of two Japanese art ceramics movements, Shikokai and Sodeïsha; and in the 1960s there was a revival of interest in ceramics on the west coast of the United States.
“We show these different centers and their activities, and that’s the geographic line of the exhibition,” Mr. Huijts said. “But we have thematic rooms as well, where we talk about things like the abstract tendencies of ceramics or nonfigurative works.”
One large-scale installation is a piece by Bita Fayyazi, an Iranian contemporary artist, who made 1,500 ceramic cockroaches that seem to be escaping a wood shipping crate, moving across the floor and climbing a wall. Another large-scale contemporary work is by Ni Haifeng, a Chinese-born, Amsterdam-based artist who explores the historical trade relationship between the Netherlands and China. His installations reproduce shipments of blue and white porcelain — both “china” and Delftware — shaped into modern objects like potato peelers and electric irons.
Ms. Harrison’s pieces are among the most recent works in the show. “On the one hand there’s this very traditional imagery of porcelain figures that we all know from the past that are all very eye-pleasing and saccharine,” Mr. Huijts said of Ms. Harrison’s art. “But she deals with it in a surprising way by adding this urban-style imagery and creating these disturbing versions. At first glance, your eye is pleased by what you think you’re looking at, but if you look better you see some layers that can knock you off your feet.”
The artist concurs. “My grandmother isn’t around to see what I’m doing to these ladies,” she said. “I think she would be pretty horrified.”